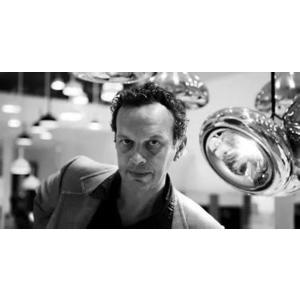 Born in Tunisia and raised in England, Tom Dixon’s reputation frequently precedes him. His mystique as a bad boy – Dixon dropped out of art school following a motorcycle accident and spent time in his 20s playing bass with a rock band and organizing warehouse parties – is nearly as recognized as his unmistakable gift for design and emergence as one of England’s most influential designers.

Having taught himself welding, but lacking a retail venue to sell his work, he opened Space in the mid ’80s. Dixon first received international acclaim with his S Chair, which was introduced by Cappellini in 1989. He launched Eurolounge in 1994 as a way to manufacture his lighting designs on British soil. For his own projects, Dixon gathers inspiration from the world around him, encompassing concepts small and large – from industrial revolution-era engines to the common paper clip.

In 1998 Dixon began working as head of design at Habitat, becoming creative director by 2007. In 2004 he began a collaboration with Artek, which was founded in 1935 by Alvar Aalto. Dedicated to bringing Artek into the new millennium, Dixon is still focused on upholding the company’s legacy.

Though he describes himself as “a self-educated maverick whose only qualification is a one-day course in plastic bumper repair,” it’s clear that Dixon is actually a very ambitious designer who’s driven by a powerful creative energy and strong entrepreneurial instinct.